Number of prosecutions for PCJ

Does the CPS prosecute people who the police think lied about rape?

In 2011, the then Director of Public Prosecutions (Sir Keir Starmer MP) took an interest in prosecutions against people suspected of perverting the course of justice through making false allegations of rape.  The CPS were worried about putting genuine victims of rape off from coming forward and didn’t want to see them prosecuted for attempting to pervert the course of justice.

…I published new legal guidance on perverting the course of justice in July 2011. For a period of 17 months, I also required CPS areas to refer all cases involving an allegedly false allegation of rape, domestic violence, or both, to me personally to consider

Yes – the DPP required that all these cases came to his desk.  Unsurprisingly, the number of prosecutions fell.  These cases referred to the CPS are important, because they were all referred the period 2011/12, which can be related to other published data about the number of allegations of rape that were reported to the police at the same time.

For the 17 months of cases, the DPP used Allison Levitt QC to write a report.  We have adjusted the figures she collected over the 17 months to give an estimate of the numbers that would have occurred over a 12-month period 2011/12.  This to make them comparable to the data available for several 12-month intervals used in other analyses (e.g. the CSEW analysis) in 2011-12.  No other assumptions have been applied.

If you’ve been falsely accused, there’s almost no chance your accuser will be prosecuted

The results are interesting.  First, we take the numbers of cases of people suspected of Perverting the Course of Justice (PCJ) or Wasting Police Time (WPT), and estimate the numbers per year.  In 17 months in question, there were 132 charging decisions referred up to the DPPs office for false allegations of rape or rape & domestic violence (DV).  Pro rata to 12 months, this equates to 93 allegations in 2011/12.  Following her data, it is probable that about 27 were charged and 14 were found guilty.  The diagram below shows this.

The thing is, that from Feist’s analysis and the Home Office’s own data in 2007, we know that about 7.7% of the people who complained to the police that they’d been raped, either admitted that they’d lied, or the police found evidence to disprove their claim.  That’s about 1,450 men who were very clearly falsely accused of rape.  And yet the data from the DPP for a calendar year 2011/12 show that probably only 14 (1%) of these were convicted.

Where is the public outcry?

What is even more surprising is that despite pretty clear evidence that the complainant had lied – i.e. attempted to pervert the course of justice – the police only bothered to investigate 6.4% of these lies.  Imagine the public outcry if they only investigated 6.4% of the 18,800 people who complained to the police in 2011/12 that they’d been raped? 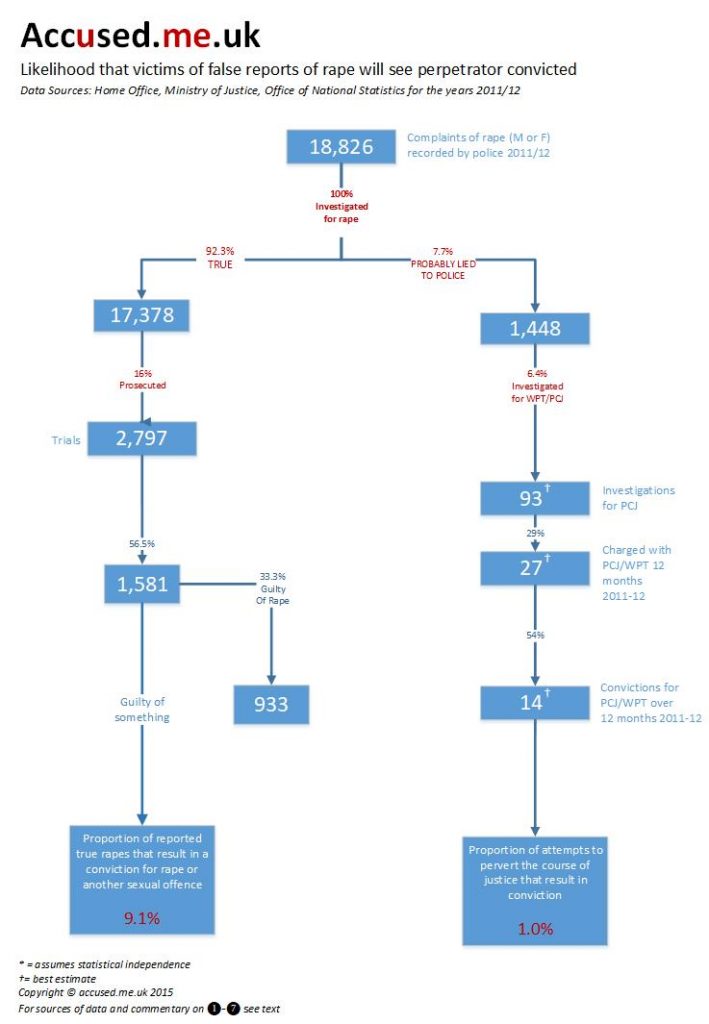 Good news for all of us today. The new 28-day limit on police bail comes into effect.

Balanced article on rape from the Grauniad

Balanced perspective on False Allegations (US)